Welcome to Sapphire Shih Tzu! I am so happy to share this wonderful breed with you. At Sapphire Shih Tzu, great care is taken in producing top quality AKC Shih Tzu for sale which will not only shine in the show ring, but will also be healthy loving pets and companions.

I hope you enjoy looking at my beautiful dogs, and reading about this enchanting breed. Please don’t hesitate to contact me with any questions or comments you may have, but be careful, as you may find your heart stolen by the wonderful Shih Tzu!

THE SHIH TZU
A Shih Tzu (pronounced sheed zu) is a big dog in a little package. Though small enough to live happily in a city apartment, it is sturdy and even-tempered, with few health problems. It loves people and other dogs of all shapes and sizes, and is definitely not a watchdog. Many Shih Tzu almost never bark and would happily give a burglar a guided tour! This is an easy breed to spoil. Shih Tzu are very good at letting you know what they want, and if you’re not careful you’ll find that they train you instead of the other way around. If you want to romp, they’re ready to go. If you want to rest, they’ll curl up quietly next to you. We often joke that Shih Tzu are like potato chips- once you have one, you always want more.

THE HISTORY OF THE SHIH TZU
The ancestry of the Shih Tzu is rather obscure, but it is probable that the breed is primarily of Tibetan origin. The history of the Tibetan “lion dogs” is interwoven with the tenets of Buddhism. In the Buddhist religion, which originated in India, the lion was sacred. However, because there were no lions in China, when Buddhism traveled East, the Chinese eunuchs and Tibetan monks bred their dogs to resemble lions. The mythical “lion dogs”, also known as “Foo dogs”, were depicted in imperial scrolls and guarded temples and palaces. The Shih Tzu were among the breeds known as “lion dogs” that came to be associated with Buddhism in China. The name Shih Tzu means “lion” in Chinese.

DEVELOPEMENT AS A BREED
The existence of the Shih Tzu as we know it today is owed to the Dowager Empress Cixi (T’ zi Hsi), whose kennel of dogs was world renowned. After Cixi’s death in 1908, the kennels were dispersed and palace breeding became haphazard. So far as is known, the breed became almost extinct in China after the Communist Revolution of 1949. China’s new leaders considered the keeping of pet dogs, especially those identified with the former royal court, a corrupt symbol of wealth.

OUR MODERN SHIH TZU
Fortunately for us, a number of Shih Tzu had been brought home by diplomats stationed in China. The gene pool record of all existing Shih Tzu can be traced to seven dogs and seven bitches. A Pekingese dog used in a known cross in 1952 caused considerable trouble, and was done by a newcomer to the breed. The descendants of this cross were not registered as purebred Shih Tzu in England until they had been bred back to purebred Shih Tzu for four generations. In the United States, the American Kennel Club required six generations. From this small gene pool, we now have our modern Shih Tzu which was recognized as a breed by the American Kennel Club in 1969, and is now one of the top ten most popular breeds in the United States. The breed can also be found in Canada, Europe, Austrailia, South Africa, Latin America, and many countries of Asia, including China, as well as islands of the sea. 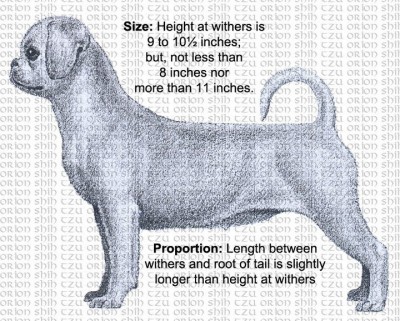 The Shih Tzu Breed Standard is a set of guidelines which is used to ensure that the animals produced by a breeder or breeding facility of Shih Tzu for sale conform to the specifics of the standardized breed.  Breed standards cover the externally observable qualities of the animal such as appearance, movement, and temperament. Certain deviations from the standard are considered faults. A large degree of deviation from the breed standard, an excess of faults, or certain defined major faults, may indicate that the animal should not be bred, although its fitness for other uses may not be impeded by the faults. An animal that closely matches (conforms to) the breed standard for its species and breed is said to have good conformation.

KEEP IN MIND
There are 2 considerations to be aware of before deciding to bring a Shih Tzu for sale into your life:

1.  The Shih Tzu is heat sensitive.  As a short-nosed breed, it is not able to withstand hot temperatures and does not cool effeciently by panting.  If you’re not comfortable, neither are they.  Heat can be life-threatening.  A cool home during summer weather and never left in a hot car, for even seconds is very important.

2.The Shih Tzu must be groomed regularly. 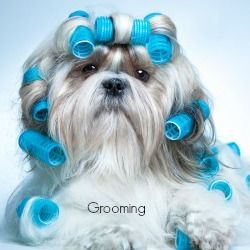 Because they have hair, not fur, it does not all fall out and regrow twice/year like most dogs.  Rather, it grows continually like human’s and needs to be brushed to prevent tangling.  Unless your dog is in full-coat (show coat) a haircut every 6-8 weeks is recommended.  This expense is part of owning a Shih Tzu, unless you care to do the cutting/grooming yourself.  If you decide to keep some length of hair on your Shih Tzu, daily brushing is recommended.  This can be a very relaxing and enjoyable time for both you and your Shih Tzu.

BEFORE YOU BUY A SHIH TZU
Please do not purchase a puppy from a pet store, or from a kennel selling several different breeds (puppy mill). I highly recommend reading the articles found on the American Shih Tzu Club’s website www.americanshihtzuclub.org under the heading BEFORE YOU GET A DOG and take time to review these. Please do not purchase a puppy from any source where you cannot see the parents and the pedigrees. There are a number of different pet registries in the United States, but just because a dog has “registration papers”, this does not mean he is a purebred of reputable quality.

IN CONCLUSION
The Shih tzu is an amazing and fun little dog who is a good sport to do almost anything. They have great fun doing agility, and can compete successfully in both obedience or Rally-O.  Although they are a toy dog, they enjoy going camping, for rides in the car, or to visit family and friends. Because of their small size and the fact that they do not shed, they are easier than many other breeds to travel with. When the training is done properly, the breed makes the perfect family pet. They love everyone they meet and are not “yappy”, making them the perfect pet for a wide variety of families. Care must always be given, however, to be mindful of the fact that they are heat sensitive. So regardless of why you are choosing the little Chinese “lion dog”, your life will be enriched in ways you can’t even imagine. 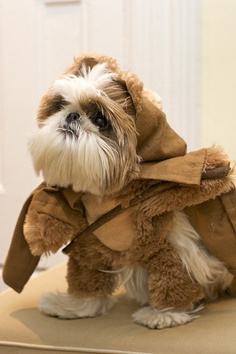 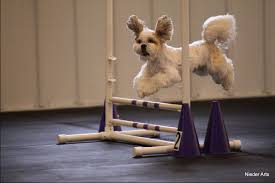 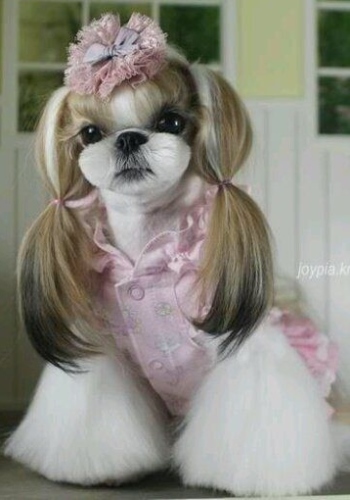